Find Yourself a Good Man - They're Out There, I Promise

After my divorce back in 1998, I spent (wasted) about a year in the dating world. Not really knowing what you want makes it hard to find it. I gave up looking and focused on bettering myself - educationally, religiously, emotionally. It was a good decision. I filled empty evenings with writing - mostly poetry and short stories. I'd share them with friends and family and enjoy the praise. :) Several poems were published in coffee table books. You could call it my year of reflection and personal growth (if you wanted to sound dorky).

Then, continuing my quest to edit my life one day at a time, I found myself scrolling through personal profiles late one night back in November 2000. Back then I was an AOL'er with a free profile on Love@aol.com. (This was big stuff back then - you never heard of anybody doing this, except of course the murdered victims that they talked about on the news.) Anyhoo... you could put in your criteria and search through the matches. You could also choose profiles with or without pictures. I purposely chose "without" because I wanted to read about them without seeing a picture, to see the inside first. Best decision I ever made.

That's when I came across Scott. I liked what he had to say on his profile so I sent him a message. Several emails and then phone calls later, we arranged to meet in person. Our first date was amazing - neither of us wanted it to end so we ended up drinking coffee in IHOP until 1am so we could keep talking. And since I wasn't murdered, like my mother and best friend were sure would happen, we continued dating.

During our get-to-know-you stage, I learned that Scott had been serving our country for (at the time) 19 years. (Brag break: He served a total of 22 with the U.S. Army.) He is the most proud man I've ever known. A true gentleman (not always easy to come by) who puts family first (that's a big'n for me). He's one of those guys who is always there for his friends, no matter what. He loves our daughter (from my first marriage) like she was his own biologically. He's supportive of everything that's important to me (including me cutting my income in half to pursue a dream). I'm telling you, he's always got my back.

So fast forward through 11 years past a wedding, a baby, a new (bigger) house, a couple of scary health issues / surgeries, and here we are... Happily married, with a good, solid, healthy relationship. Friends have teasingly called us the White Picket Fence Couple, but trust me, we're not. We work hard at our relationship. We're both devoted to its lifelong success.

My point in writing this post (gaaah, bet you're happy I'm getting to the point) is that there are good men out there. I had to weed through some to find Scott, but they're out there... if you know what you're looking for.  And THAT is my point. Figure yourself out first. Know who you are and where you want to be. Know exactly what it is you want - in a man, in a relationship, out of life. THEN, go get it. And do not settle.


You are 100% in control of your happiness.
Goodnight... from one half of a happy little couple. ...::inserts a corny little picture::... 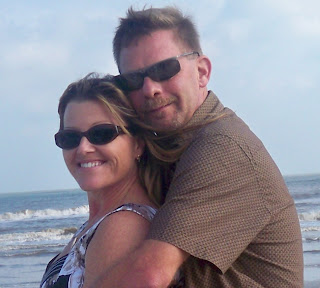 My Brain Turned On at Around 30 Years Old

I spent my childhood and teen years like most everyone else ... having fun / acting like an idiot. But at some point that phase of life is over and you're a grownup. Let's say that's at age 20 (because really, who decided 18 years qualifies anyone as an adult?). Okay so 20 (which is still arguable, but we need a number here) ... what was I doing? I was married to a fool and expecting my first child. ::shakes head:: It's the ten "grown up" years from 20 to 30 that I really cannot account for. I had no real direction. I hated my job. I didn't know who the hell I was, where I was going, what I wanted -- in a relationship, as a career, out of life. But somewhere around 30 years old my brain turned on ...CLICK...

I got rid of the fool.

I enrolled in college and took random classes just so I would be IN a classroom and stop talking about how I'd LIKE to be in one. And I found out I could not get enough -- education became a sort of drug for me.

I went church shopping and found a church community where I fit in and could contribute. And I learned the true meaning of belonging.

...And I started writing. That's when everything click-click-clicked into place. I found out that I LOVED writing, and all of a sudden I knew where I was going, what I wanted to be, the kind of job I would enjoy doing. I could actually RESPOND when somebody said, "Tell me a little about yourself."

I finally knew who I was ... I was Jennifer, the Writer.
Posted by MoodyEdits at 2:38 PM 2 comments: